Hello everyone ! Today, zoom in on lunar eclipses 🙂

Have you seen the magnificent lunar eclipse of September 28th? I found it sumptuous, (I also cried all my drunk when I saw the splendor of the show of Mom-Moon)!
However, I must tell you that my night was not one of the most peaceful. I felt very weak , irritated and sensitive . I felt overwhelmed with strong emotions and had a hard time understanding my energies.
I asked myself, ” But damn it, what’s going on? ‘ ‘Is it a coincidence or is it due to the eclipse?’ Moreover, I was not the only one to whom this phenomenon happened. Superstitious but reasonable, I fell asleep with a heavy head, postponing my research on the effects of lunar eclipses overnight.

Finally, here is the summary of the information I gathered during my research. There was so much to read and learn on the subject, it really fascinated me! The most exciting thing for me was to read how the ancient people explained the lunar eclipse: adorable and so mystical !

I hope it will excite you as much as me. And, if you find yourself disturbed by the lunar eclipse, please let me know by comment or private message on the Psychic Sphere Facebook page! 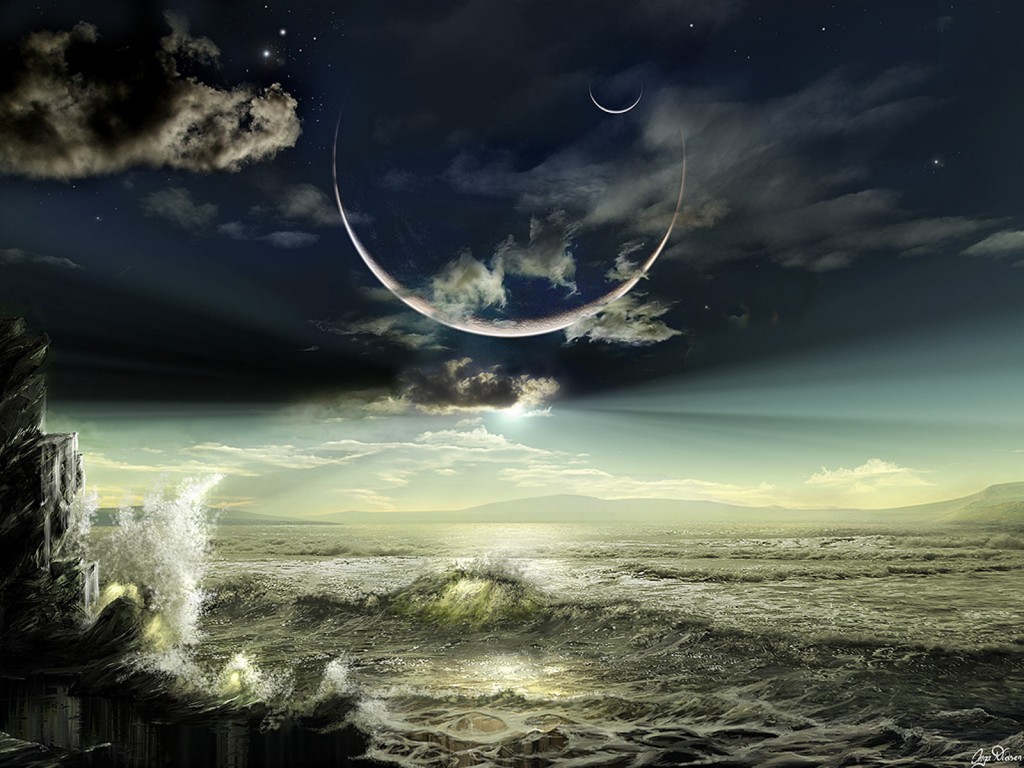 Did you know? Lunar eclipses can be seen with the naked eye.

Did you know? Each of the eclipses in the tetrad occurs about 6 months apart and each has 5 full moons between them.
Did you know? The 21st century will have 8 lunar tetrades, the maximum number of lunar tetrades that can occur in a century. This happened for the last time in the 9th century.

Why does a total lunar eclipse mean the term “Blood Moon”? It’s cold in the back, right? Brrrr …

According to some sources, this term comes from the Bible. Christian Pastors Mark Blitz and John Hagee say the lunar eclipses of 2014-2015 fulfill a biblical prophecy that these eclipses would herald challenging and challenging times ahead. Apparently, eclipses of the 2014/2015 Tétrade have occurred at the same time as some important Jewish holidays, Easter, and the Feast of Tabernacles. They saw it as the sign of the end of time. Of course, many have rejected any apocalyptic significance of the tetrad.

Some use this term in reference to the reddish color that the Moon once eclipsed. 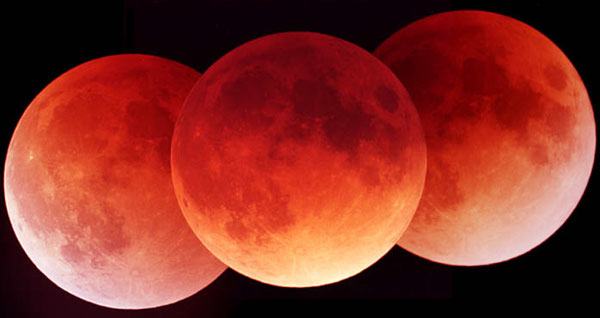 Eclipses are very important events at the spiritual level. Some argue that lunar eclipses lead to the increase of Raja-Tama, which has negative effects on the human being, and by extension, on humanity.

Raja-Taa is a term that brings together two concepts: Raja and Tama.
Raja represents action and passion; Man who lives more for personal gain and for success.
The Tama represents ignorance and inertia; the man who has no scruples to walk on others to pass in front of or to harm society.

Why do eclipses increase Raja-Tama?

* In physical eclipses: Sun or Moon light is obstructed before it reaches the Earth. In the general cycle of the day and / or night, this darkness is an anomaly. Darkness takes precedence over the Light. Negative energies can then use darkness and thus increase Raja-Tama to harm society.

* In subtle eclipses: A higher ghost creates a black and negative energy barrier between the Sun / Moon and the Earth. It attacks the subtle Sun directly. This obstruction causes an increase in Raja-Tama.

This is why some people may feel physical and psychological symptoms: tiredness, sickness, lethargy, excessive negative emotions, difficulties in making decisions, etc …

The Moon affects the mind, it is well known. On a full moon, its effect is pronounced. Thus, the total eclipse of a full moon greatly accentuates its effect!

The eclipse has long terrified the Man because he saw in her the divine chastisement, a sign of very ominous. It was very common that the armies refuse to fight during an eclipse! There is a belief that evil spirits take advantage of this darkness to engender negativity and corrupt man. According to astrologers, eclipses bring bad luck, because the evil arriving more often than the good, if they presaged the happiness, they would lie.

During Ancient Egypt(also in the Hebrew tradition) eclipses were attributed a disastrous character. The destruction of Jerusalem by Titus, which came after an eclipse of the moon which was repeated twelve nights in a row, only comforted man in his belief.

It seems that only the Cambodians gave the eclipse a favorable meaning.

According to the ancients , the eclipses of the moon proceeded from the magic virtue of certain words. With her words, the Moon was torn from the sky and drawn to the Earth, forced to throw on the grass a foam making them more suitable for the sacrilege of the enchanters. In order to deliver the Moon, the Elders made a lot of noise, a din aimed at preventing the Moon from hearing these words.

In Germanic mythology, the Sun and the Moon would be pursued by two celestial wolves named Moon-garm and Fenris. The eclipses were caused by the struggle of these two wolves. In order to fight these two wolves, the wizards were beating on drums, screaming, to make as much noise as possible. 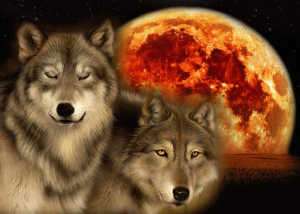 In ancient Egypt, the pharaoh circled the temple Ra (solar god) to rescue the eclipsed star.

In India, it was claimed that eclipses were caused by a demon who spread his black claws over the celestial body. In order to relieve the star, the custom was to stand in a river with water up to the neck.

Chinese beliefs are numerous:
* An evil genie would cause eclipses by hiding the sun from his right hand and the moon from his left hand.
* A griffin or a toad could also be responsible for eclipses, as they could devour the moon.
* Another ancient belief evokes a hole in the Sun.

Ancient Persians were shooting arrows at the eclipsed star to let go of the dragon that was trying to devour him.
Also, the belief was that if a pregnant woman touched a part of her body or head during an eclipse, she would give birth to a child covered with dark spots. If she ate the stem of a pear, the child would have a dimple on the chin.

In the Muslim Mandibles of West Africa, the eclipse is attributed to a cat posing its paw between the Moon and the Earth. The custom is to dance and sing in honor of Muhammad during the eclipse.

For many primitive peoples, the eclipse is explained by the struggle of the two stars who “seize and fight fiercely”. However, they consider that their strength is equal, which is why the outcome of the fight is still uncertain.

The East African Yaos used to pick up picks and axes against each other, shouting “Separate right now!” “.

There are many countries whose beliefs attribute eclipses to evil spirits: China, Russia, Lapland, India …

According to Jewish tradition and in 17th century England, it is best to fast during the eclipse. The English considered that it was better to look at the reflection of the eclipse in a bucket of water, because to look directly at the eclipse brought misfortune. Indeed: the Moon, during its occultation, would descend into the underworld …

Here’s a tip straight from the Ancients: When you’re on an eclipse, it’s best to avoid appointments, new businesses, and anything else that can change our current situation. Change can not be favorable… 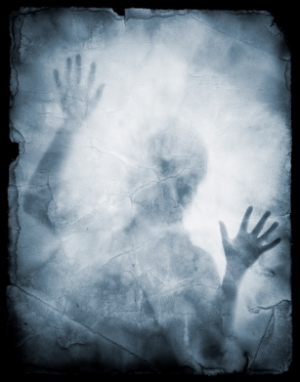 In June 1406, the people gathered in the churches during the eclipse of the sun, because he feared the end of the world.
In 1654, the civil and religious authorities were forced to intervene in order to bring calm among the Parisians, frightened by the eclipse.
In 1828 and in 1829, two eclipses succeeded one another and the people saw in it a prediction of the threats weighing on the house of the Bourbons and the royalty.
On July 11, 1991 in Mexico, Hawaii and California, the eclipse of the sun announced the Aquarian Age and the birth of a new Age. The spectators of the eclipse were struck by a real cosmic trance: they felt the importance and the frequency of the energies due to the eclipse and were sensitive to the birth of this new Age which, according to them, opened them the doors of a New Real Life. Some had placed a pyramidal hat on the pubis to collect the benefits of the fertility of the Sun, others had painted the body and face. During this cosmic union, the spectators felt like “the children of Aquarius, the mutants who would open the door of the New Age to humanity for a time of love and light”. (current woman, December 30, 1991).