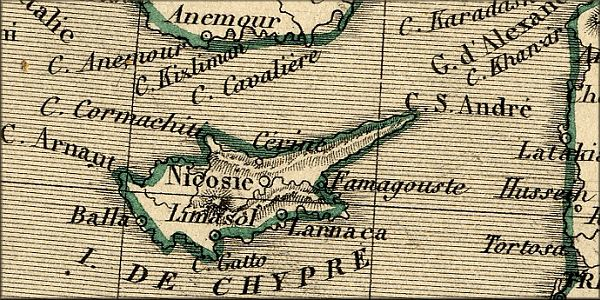 In 2011 , an ancient 1500-year-old amulet was discovered by a team of archaeologists led by Professor Ewdoksia Pepuci-Wladyka. The team conducted the excavations in an ancient agora (gathering places in the ancient world) located in Nea Paphos (South West Cyprus).

Here is the amulet: 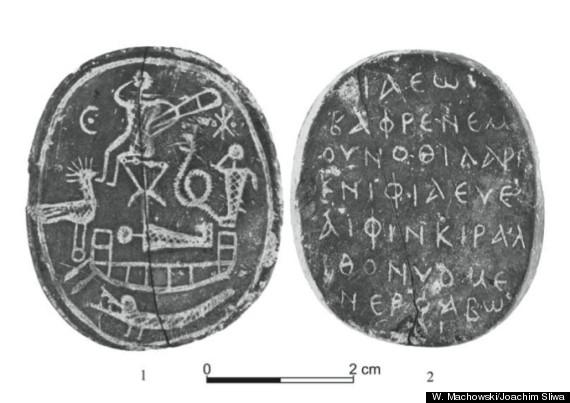 This type of amulet was very widespread in the Old Times. Amulets were created to protect their wearer from various dangers and harms. 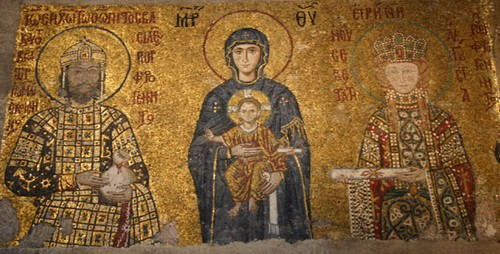 Palindrome
There is, on one side of the “magic” amulet, a very interesting inscription that can be read in the densities. This palindrome means: Iahweh (a god) is the bearer of the secret name, the lion of Re safe in his sanctuary

Egyptian images and symbols.
On the other side of the amulet are many images, most likely inspired by the hieroglyphs of ancient Egypt.

* A mummy: which would represent Osiris (Egyptian God inventor of agriculture and religion).
* A boat.
* The image of Harpocrates (Greek God Child) sitting on a stool, his right hand in front of his lips.
* A cynocephalic (Greek mythical creature with a dog’s head) who holds a paw in front of his lips (a bit like Harpocrates).

However, there are many ‘errors‘ present on the amulet.
Joachim Sliwa, professor at the Institute of Archeology at the Jagiellonian University in Poland (Krakow), noted in the journal Studies in Ancient Art and Civilization that the scribe made two small mistakes.
The creator of the amulet would have written twice the letter “ρ” instead of the letter “v”.

It also seems that the Egyptian sources were not very well understood by the creator of the amulet, because many misinterpretations appear, as well as some irregularities. The mythological characters depicted did not seem to be fully understood.
For example, Harpocrates should be sitting on a lotus flower instead of a stool.
The cynocephalus should not imitate Harpocrates, because in the classical version, he faces , the legs raised in adoration.
Cross lines on the bodies of Harpocrates and the cynocephalic suggest that the creator of the amulet thought they were mummified, like Osiris.

Are these simple mistakes or coded messages that we have not yet been able to decipher? Perhaps we will discover it in the next centuries to come …