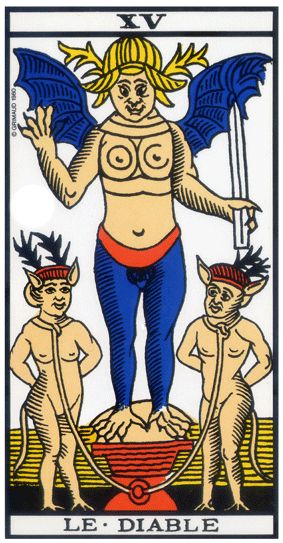 The Devil is the 15th major arcana tarot Marseille.

Symbols of the Devil

The Devil represents the lack of control, domination, instinct, disorder, the 15, the Hebrew letter samekh, at Cerunnos, at Zervan.

On the map of Tarot de Marseille, the Devil is represented by Baphomet of the Templars. His head and legs are those of a goat and his flanks are hairy. The four colors that cover it are representative of the four elements of the cosmos. In other words, these forces, accessible to all, are difficult to control and to submit.

We can see two half human characters supporting the Devil are chained to the Devil’s pedestal. Thus perched, the Devil seems to want to dominate men and events. The two characters represent yin and yang by their clothes of complementary colors.

The chains that attach the characters represent the passions of the Men who imprison them and make them “animal”.

The Devil’s Card advises to get rid of the chains that trap us to find courage and willpower. When this card comes out, she advises the consultant to act in heart with his instinct.

The Devil is Fall, Tuesday, Scorpio and Capricorn.

Card effects last two to three months and continue to have influence for five to six months. 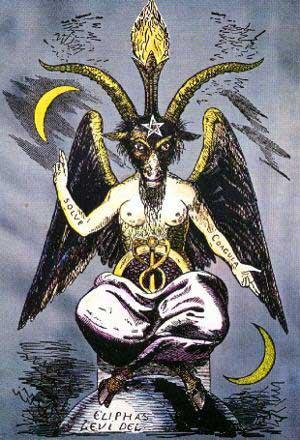