The Fool is part of the major arcana tarot of Marseille. Unlike other cards / blades, it has no number. It can thus be considered as first or last major arcana.

Signification of the Fool

The Fool is a character obedient to his irrational urges. He wears a multicolored garment and a beret. The beret is the headdress of court jesters. He also has a backpack filled with inconsistent treasures.

We can see a wild animal, a dog or a wolf, who bites it and pushes it towards the inevitable. The wild animal represents lucidity and remorse.

The fool has renounced matter and ambition; his evolution is exclusively interior. He is careless about danger and pain.

It is associated with 0, and the Hebrew letter shin.

The Fool delivers the following message: it is necessary to have a lot of common sense in order not to go out of the way of reason. The Fool goes too far, because he wants to approach the infinite.

It is associated with laboratories, foundries, barracks, ovens.

The duration of the map forecast is very short: one week only. 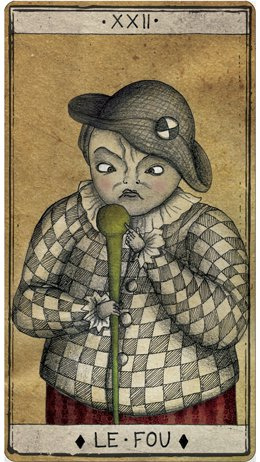