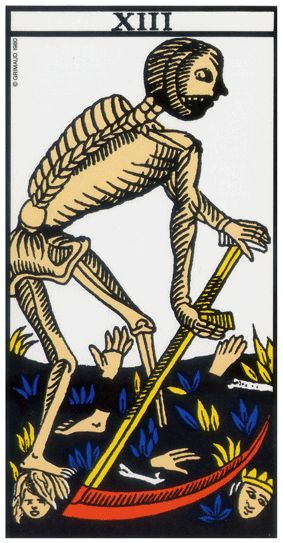 Death (also known as Unlabelled) is the 13th major arcana of the Tarot de Marseille.

The death card represents the initiatory passage, the transformation, the novelty, the death, the rebirth, the birth, Saturn, the 13th, the Hebrew letter same.

Death is represented by a skeleton whose bones are colored pink. So, he represents the flesh. He grabs a false yellow with his left hand: the yellow, color of the Earth.

A body and a head are at the foot of Death: yet they do not seem to have lost their vitality or their expressions. This means that nothing ever really dies: what seems lost is actually transformed. Death transforms. The material bodies become dust but the thoughts, the facts, the dreams can not be destroyed. The message of the card is this: death is painful but must be accepted.

A short story: Ancient Siberian people used to bury the skeleton of the bear after eating it. They then watered it every day to ensure the rebirth and fertility of the totemic blood consumed.

Death represents from early autumn until the end of winter. The days of the week represented by the arcane # 13 of the tarot of Marseille is Tuesday and Saturday. The associated zodiac signs are Scorpio and Capricorn.

Cemeteries, mausoleums, crypts and caves are associated with Death.

The effect of the card is sustainable, even if the actions predicted by the card are released quickly (3 to 4 weeks only).

Please note that “Death” rarely appears on Arcane #13. The fact that this is not registered would preserve the consultant from bad luck. Because to draw the card n°13, which is in addition that of the death could be regarded as a certain misfortune for some! 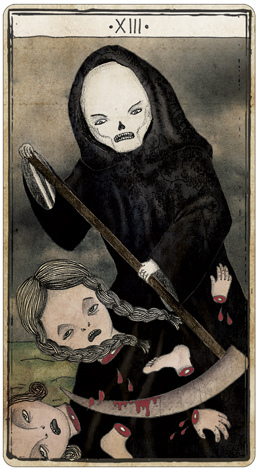