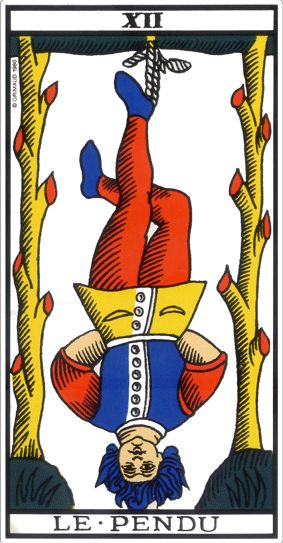 The Hanged Man is the 12th major arcana of the Tarot de Marseille.

Symbols of the Hanged Man

The Hanged Man character is hanged by the feet and not by the blow. Formerly, hanging by the feet was an extremely painful punishment reserved for the debtors.

Two columns (which surely correspond to the entrance to Solomon’s Temple) surround the Hanged Man who sways in a vacuum. The Hanged Man has his hands tied behind his back, which prevents him from freeing himself and acting.

The message of the Hanged Man’s card is the following: pain, loneliness and helplessness (evoked by the arcane) springs forth the clear, illuminated idea. The Hanged Man evokes the beginning of acceptance and transformation of the Self.

The Hanged Man, dressed in red and blue, evokes innocence, purity, strength and courage. The strength of the Hanged Man lies in his soul with occult powers, not in his muscles

The position of the Hanged Man is reminiscent of an upside-down triangle surmounted by a cross: the fulfillment of the Great Work.

The Hanged Man assures the consultant that knowledge is obtained by remaining motionless for hours. By remaining still we are receptive and available to listen and we are surprised by the Illumination (like the Indian ascetic, the Tibetan, the Sufi). The secret to penetrating the essence of things is to apprehend them in reverse.

The Hanged Man represents the end of the winter, the Saturday, the scales and the fishes (astrological signs).

The duration of the forecast is five or six months. The effects of the card persist in time. 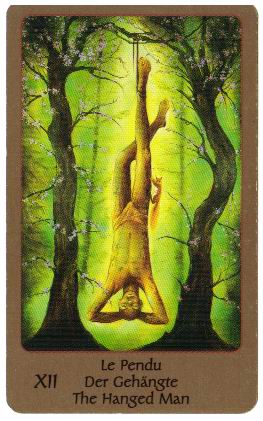