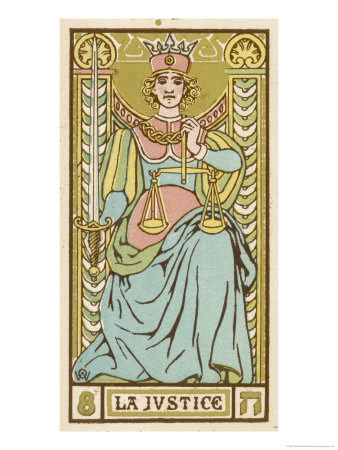 Justice is the 8th major arcana of the Marseille tarot.

Justice is here represented by Astrea, Greek goddess of justice. She displays a big, stern, frozen smile. She holds in her hand the equinoctial balance which weighs the pros and the cons. It weighs and quantifies the mistakes made.
On the arcane, we see a winged angel of the zodiac representing the functions of Saint Michael. With his iron crown and the throne of justice, the angel is the rigor of the law itself.
A double-edged sword is held by the right hand of Justice. Double-edged, it represents the inevitability. This sword, intended to restore the broken balance, administers a penalty or reward the consultant.

The red and green colors of the clothes of Justice undoubtedly represent the good and the evil opposite.

The arcane reminds the consultant that the truth is unpleasant and sometimes very difficult to accept. Astree, taken refuge in heaven, is sickened by the injustice of men in this mystery.

Justice is the autumn, the evening, the month of October. The zodiac sign represented by Justice is obviously Libra.

Associated with fields, courts, gardens, the study of man, laws, art galleries, painting, sculpture, Justice is a double-edged card. The effect of the card is long: from 3 months to 1 year and a half. 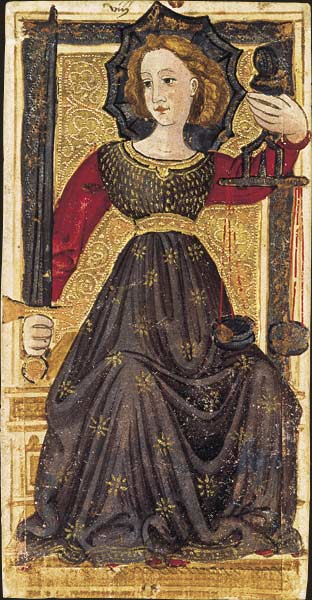