The Hermit is the 9th major arcana of the Marseille tarot.

Symbols of the Hermit

The Hermit relies on a cane that captures the instinctive energies of the universe: the Hermit must submit these energies to control them. With his right hand, he holds a lantern that lights his way. To avoid disturbing passers-by, the Hermit leaves part of his coat to hide the Light of the lantern, which could be associated with the Light of knowledge. Passersby are not used to this Light.
The red and brown mantle of the Hermit refers to the earth. Blue on the inside, it refers to the priority of the heart and the initiatory knowledge of material wealth.

The Hermit represents knowledge, but he reminds us that knowledge does not manifest itself at first sight. Moving slowly but surely, alone, on the path of life, the Hermit bases the future on his knowledge of the past. The hermit meditates, he is patient and modest: he knows that his acquired knowledge is nothing compared to the one he still has to learn.
The map explains that we must be aware that we can not penetrate the mystery until we have dominated the mind.

The time, place and duration of the forecast.

The Hermit represents the winter, the month of December, the Saturday, and the astros signs Capricorn and Virgo.
The Hermit is associated with mines, caves, ruins, woods, dark places, cemeteries, monasteries, yoga classes, courses in Eastern philosophy.

Like the slowness of the Hermit, the effects of the card persist: six months to three years, or more. 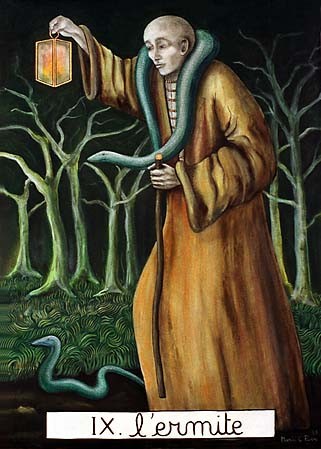