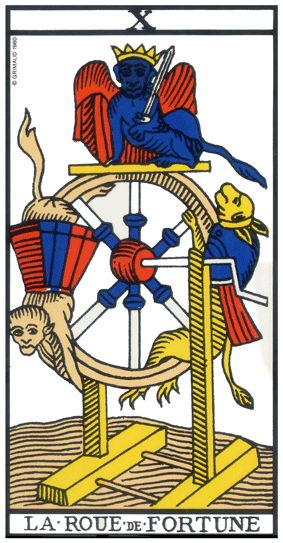 The Wheel of Fortune is the tenth major arcana of the Marseille tarot.

Symbols of the Wheel of Fortune

The symbol of the Wheel, widespread in medieval iconography, represented the universal and natural cyclic rhythms but also the torture . In the past, the wheel was an instrument of torture to extort confessions. The map of the Wheel of Fortune in the Tarot of Marseille is inspired by the vision described in the book of Ezekiel: “four wheels of fire and strange animals in groups of four” .

The animal figures represent the ascent and the fall. A winged and crowned monkey is straight on the wheel, another figure is descending and the other rising.

This circular movement represents change, becoming, the union of opposites. The four colors on the map represent the four elements.

The Wheel of Fortune represents the goals, the ambitions of an individual and his real possibilities of realization.

The Wheel of Fortune is associated with the winter, the month of January, the Saturday and the astronomical signs Virgo and Capricorn.

The grounds, the mountains, the mines, the salons of representation, the geriatric institutes are represented by the Wheel of Fortune.

The events predicted by the map can occur between 4 days and one year, in other words, can happen very quickly or very slowly. It depends on the cards that are next to the Wheel of Fortune in the game! 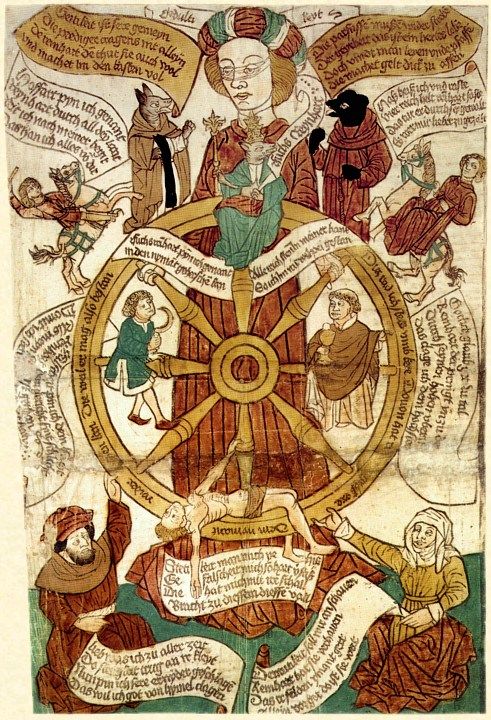