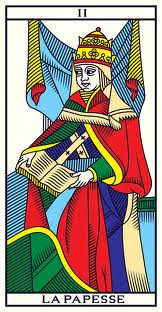 The Papess is the second major arcanum of the tarot of Marseille.

The Godess represents the mystery, the intuition, the secret, the silence, the door of the initiation, the letter of the Hebrew alphabet, the feminine knowledge, the Moon, the emotivity , foresight.

The Papess is respected, considered from the Old Times as the path of intuition and heart. It does not mention religion, culture, or active and masculine research.

His purple and blue coat refers to spirituality and wisdom. The Image of the Great Mother hides behind this cloak: she is also known as Isis and Diana, Ishtar and Sequana.
A veil hides the face of the Popess. To remove it, one must undertake a long inner journey during which it is necessary to learn differently . The knowledge we need here is in contact with the secret forces of the unconscious.

The red and green she wears represents the masculine, the active, the yang and the receptivity, the femininity, the yin.
The book that the Papess holds on her knees is to be assimilated with the heart: one can penetrate only with the intellect. She learns that in order to know the essence of things, one must experiment the feminine, intuitive and nocturnal way. Now that the feminine path is no longer repressed, it is necessary to fight for this power and to use it.

The entrance to Solomon’s Temple is represented (it is also known as the Masonic Temple). The Popess sits at the entrance of the temple, and she represents the inner transformation through ritual and the confrontation of ideas with others.

​​The weather, locations, and duration of the forecast

The Pope represents the months of May and June, Monday, Cancers and Bulls.

It is associated with the temples, the house, the obstetrician’s offices, the places where one lives alone.

The effects of the card last from one to three months. 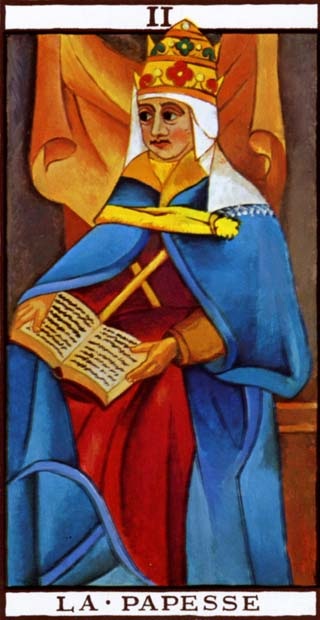